skip to main | skip to sidebar

Due apologies for the delayed answers and response. Fully deserve the brickbats for same. Pls find answers below:

1. According to IMDB, the first of the type was Another Part of the Forest in 1948. Can be traced to the original press kit for The Godfather II. The Oxford Dictionary mentions that this word first came up in the article The Magazine of Fantasy & Science Fiction in 1958. What is being referred to here ?

2. Actually lot easier than it sounds: W, the fine actor he is desired to play the role in X, but was offered Y the same year and he ended up taking the latter role. He eventually lost the Best Actor Oscar that year to Z who played the role of X in X. Name W, X, Y and Z.

3. Identify the fictional movie organisations from their logos and also the the movies which they feature.

4. Thomas Dixon wrote a book The Clansman, which was made into the landmark film, The Birth of a Nation. However Dixon did not make money out of the movie. He went on to do something which created a Hollywood tradition. What did he do ?

Thomas Dixon went on make 'The Fall of a Nation', thereby making the first Sequel. 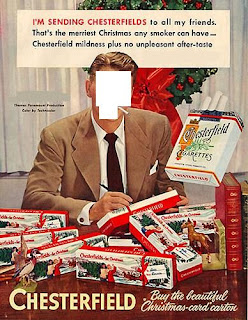 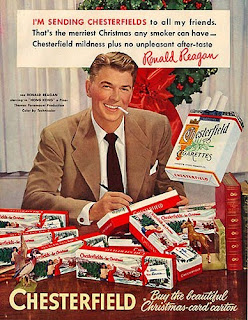 6. Name the two characters and the creator. 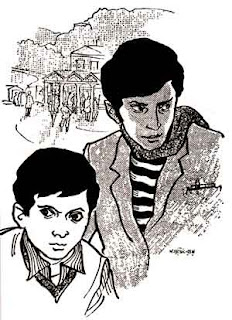 Feluda and Topshe by Satyajit Ray

7. Identify the building, logo and connect. 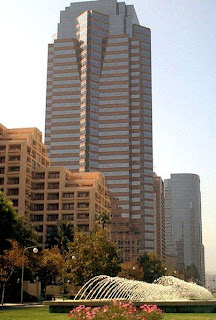 Fox Plaza, LA featuring as Nakatomi plaza in Diehard and the logo is the fictional Nakatomi Corporation in the movie.

8. How is this book significantly immortalised ? 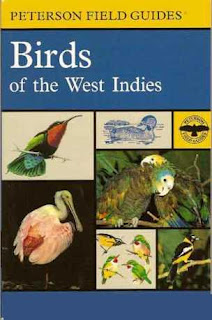 The book was by ornithologist James Bond whose name was borrowed by Ian Fleming for his protagonist. 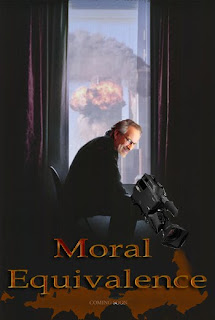 10. Identify the movie and what is the significance of this scene. 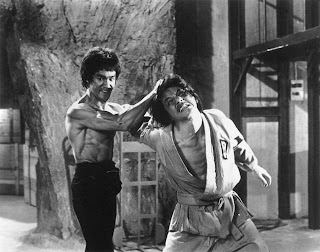 The only (fraction of a second) scene from Enter the Dragon where both the legends, Bruce Lee and Jackie Chan are seen together. (click link for video)

Thanks a bundle for your response...

Pls send in your feedback, comments to kartheegeyans@gmail.com

Apologies for the long hiatus...
Pls find answers to the last post below:

1. A saga was started in the year 1842 in Mount Road, Madras by a Portuguese piano tuner by name Misquith. Originally known as M/s Misquith & co., the store metamorphosed into the largest and oldest in South India when it broke the western adjunct and started retailing Indian and far eastern goods. What is the present name of this establishment ?
Musee Musicals
2. Who does the lyrics of this song refer to, outside of the context of the movie in which it appears. Explain.

The song gives an indirect eulogy reference to Ilaiyaraja, his mother's name is Chinnathayammal

3. He was Mani Ratnam's first choice for the lead role in his 'Bombay' who on his refusal settled for Arvind Swamy. However he played a major role in the movie behind the screens. Economic Times has ranked his company, No. 2 in the country in the field. He also runs a film school. Who is this multifaceted guy ?

4. He is Sampooran Singh Kalra, more popularly known by his pseudonym. Identify.

5. Who acted, performed and composed music for this Cannes entry movie ?

6. Identify the music composer of this song which is still a hot listener's choice on radio and light music concerts ?

R K Shekar
7. Born in London and came to prominence in early 2004 through file-sharing of 'Galang' and 'Sunshowers' on the Internet. Time magazine placed this person in the TIME 100 list of 'World's most influential people' for having 'global influence across many genres'. Who ?
MIA (Mathangi Arulprakasam)
8. Identify this fruit. Normally orange or red, but could be dark purple and also black in some species.

Rose hips (the fruit of rose flower)
9. Identify the speaker and what is he talking about ?

10. It was created by Henry Luce and Briton Hadden in 1923 making it the first of its kind in the US of A. They first considered naming it 'Facts' but settled for this name. Whatizit ?

The obvious grand connect is AR Rahman
ARR born to music composer RK Shekar, initially worked for Musee Musicals and then for Ilaiyaraja as keyboardist. He also accompanied Ustad Zakir Hussain on his world tour. Rajeev Menon brought him to the world of ad jingles, he made his film score debut with Roja (Rose). Danny Boyle got him to compose for SM which got him 2 oscars, one of which he shared with Gulzar and a nomination with MIA and in 2009, Time magazine placed him in their list of 'World's 100 most influential people'.
Scores: (Check leader board for consolidated tally)
1. Radhika - 28 (Congrats !)
2. Sripriya - 28 (Congrats !)
3. Karthik U - 27 (Good show !)
4. Ashok Gharpure - 26
5. Ajith Kumar JSV - 26
6. Mayura G - 24
7. Raja - 20
8. Paul Teresa - 7
9. Suresh Ramasubramaniam - 5

Hello World,
Answers to the Ind(ia)ependence Quiz, a quiz on India and her Independence movement.
The number of responses were far and few...hardly patriotic to note...and nobody maxed.
1. What / who does this painting illustrate and who is the painter ? 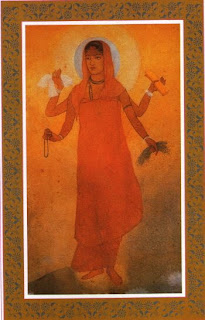 The illustration of Bharat matha by Abanindranath Tagore, nephew of RNT.
2. Who sang the song Vande Mataram on the first (Independence) session of the Indian Constituent assembly on the early hours of 15 August 1947 ?
Sucheta Kripalani who went on to become India's first woman Chief minister. 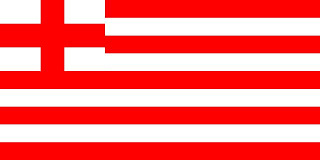 The flag of the British East India Company, though it went through many changes, this was the first.
4. This legend was born around 1725 in the Hindu Vellalapillai caste in Tamilnadu. From modest beginnings he joined the troops of Arcot and later became the commandant of the East India company forces. He proved an able administrator when he was entrusted with the responsibility of administering Madurai after the decline of the nayaks in the region, during which period he converted to Islam. He eventually turned against the Nawab and the British after a feud erupting between the two and organised a revolt against them. His revolt against the British predates the 1857 uprising and ranks as one of the true armed reprisals against the British with a mobilised and organised army. Eventually his aides were bribed to have him caught and he was hanged in 1764 in Madurai. How is this forgotten legend (and remembered for other reasons) popularly known as?
Muhammed Yusuf Khan, originally and popularly known as Marudhanayagam (Pillai). He is hardly remembered except for Kamal Hassan's unfulfilled biopic on him.
5. Identify this cover / story of Amar Chitra Katha ? 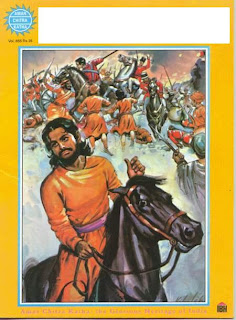 Anand Math (ACK version of Bankim Chandra Chatterjee's novel on the Sanyasi Rebellion of the 1700s)
6. She was born in Switzerland. She later married an Indian, took the nationality of India and became a Hindu and came to be known as ________ Bai. Thanks to her artistic skills and indepth knowledge of the mythology of India, the Vedas and the Sanskrit language she was entrusted with this responsibility. Identify the person and what is the responsibility?

Savitri Khanolkar and the designing of the Param Vir Chakra

8. Considered the revolution’s best general. A day after his hanging, the London Times mentioned in its report of this popular hero’s hanging that a great scramble was made by officers and others to get a lock of his hair. Identify. 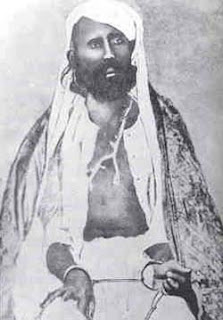 Atal Behari Vajpayee added Jai Vighyan (Hail Science !) to the slogan after the Pokhran tests of 1998.

10. Identify all pics and connect: 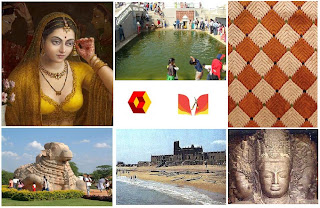 Nobody cracked this...though not very tough... the pics in clockwise order from top left indicate Mrignayani (a painting of a lady - mrignayani means 'doe-eyed'); Talai Cauvery (the origin of River Cauvery; Phoolkari embroidery; Trimourti cave rock-cut at the Elephanta caves; the ruins of Poompuhar in Tamilnadu; the Lepakshi nandi statue in Andhra Pradesh; and the two logos in the middle are that of TV channels Kairali and Gurjari. The connect is simple as that of the names of Handicraft emporia of different states of India - Mrignayani - Madhya Pradesh; Cauvery - Karnataka; Phoolkari - Punjab; Trimourti - Maharashtra; Poompuhar - Tamil Nadu; Lepakshi - Andhra Pradesh; Kairali - Kerala and Gurjari - Gujarat.

Pls check leaderboard for consolidated scores and await the next quiz.